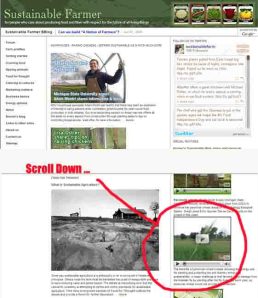 My video package on the perennial wheat research taking place at the Kellogg Biological Station has been featured on Sustainable Farmer.

by Steven Davy and Mike Presley

Lansing gets a lot of attention when it comes to the budget. Rightfully so, as the capital of Michigan the decisions made in Lansing are felt across the state including just three and a half miles down the road in East Lansing.

Wednesday officials from the Michigan Municipal League called on state lawmakers to halt a proposed $162 million in cuts from state revenue sharing for the 2009-10 budget year. If approved, the cuts would reduce revenue sharing by approximately $733,000 for East Lansing and $2.2 million for Lansing.

For East Lansing budget cuts could mean fewer fire and police officers on the streets. The cuts could also impact funding for parks, libraries and social programs.

In the video below, East Lansing City Manager Theodore Staton discusses what the cuts to the budget might mean for the city.

The recession hasn’t been as hard on East Lansing, but it still hurts.
Vodpod videos no longer available.

What gets cut? The choices are difficult.
Vodpod videos no longer available.