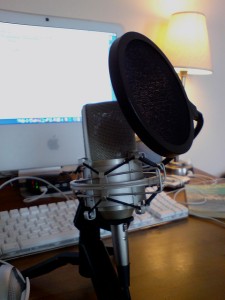 “Podcasting” is a terrible name says Slate’s Andy Bowers. It stems from a device that a lot of people don’t really use anymore, and it sounds like it comes from 2004-2005 (which it does). Andy’s beef with the word “podcasting” aside, he offered a lot of compelling insights for producers during a presentation on podcasting during a webinar over at NPR Digital Services.

I finally got a chance to watch the much tweeted about webinar, the first in a new series at Digital Services, and I’m glad that I did. Andy, formerly of NPR West, joined Slate to become their Podcasts chief more than seven years ago (though he still maintains a desk at the NPR bureau).

Here are some highlights from the presentation:

1. Podcasting is simply on-demand audio. As television consumers, we have grown accustomed to the time-shifting that DVRs and services like Netflix offer. This behavior will become more and more the norm. We’re beginning to see the disruption in the world of radio in similar ways. Andy suggests, podcasting will thrive as people demand more control over all their media.

2. Podcasting is mobile, and always has been. The widespread shift to smartphones has put in your pocket an extremely powerful tool that has only made listening to podcasts easier. Cleverly (and correctly), Andy phrased audio in the digital space this way: “podcasting is the original mobile app.” Podcasts will remain one of the most important things in mobile.

3. Most importantly: Podcasting is about experimentation. There is a low risk of experimentation on the internet. If you’re an audio professional and have an idea for a podcast, make a pilot. Just try.

Andy spoke of Google’s 80-20 philosophy (which I love) and framed it in terms of piloting a new podcast in the way technologists think of agile development: fail faster.

“It’s worth the experiment even if it is a failure,” Andy says. You might have just one success for every 10 tries, but that success might become a national success. He added “the up side is very big as opposed the cost of trying.”

Andy also noted that when Slate tries out a new podcast they think of it as the beginning of a process. During this throw-everything-at-the-wall process in the evolution of new audio ideas, Andy’s team encourages listeners/audiences/users to offer critiques. He wants the audience to tell them what they hate, as well as what they love. The two-way street is important for the process and in new Slate podcasts, “We’ve changed a lot of things because of that (audience response).

There seems to be a growing interest in audio in the digital space. I am endlessly curious and impressed by the thinking over at SoundCloud and other digital audio upstarts.

Experimentation is key. Digital disruption in radio is here.

Digital Services has a good review of the webinar here from Ki-Min Sung. And if you have time, watch Andy’s presentation, it’s good.