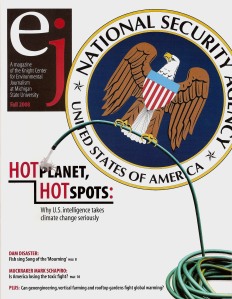 The United States military and intelligence community have moved beyond debating the existence of global climate change and are planning for the worst. Alarming them is climate change’s potential to further destabilize fragile nations, causing mass migration and providing a breeding ground for widespread acceptance of extreme, potentially violent ideologies.

The change in climate caused by the burning of fossil fuels and by other human-related emissions has wide-ranging implications for U.S. national security interests over the next 20 years, Thomas Fingar, the chairman of the National Intelligence Council, told Congress last June.

“We judge that the most significant impact for the United States will be indirect and result from climate-driven effects on many other countries and their potential to seriously affect U.S. national security interests,” Fingar testified.

Some of the top minds at the Defense Department and the Office of the Director of National Intelligence, like Finger suggest that climate change is a potent threat to national security. Impoverished regions in Africa, Asia, Central America and elsewhere are already experiencing negative effects from climate change. Increasingly hotter and longer summers are drying precious water supplies. Water shortages reduce the capacity of weak governments to sustain agriculture, leading to famine.

“When these conditions exist, people begin to feel disenfranchised and can become susceptible to the arguments of extremists,” Catarious said in a phone interview.

In May 2007 the Center for Naval Analyses gathered 11 retired three- and four-star generals and admirals whom collectively advised a report titled “National Security and Climate Change.” It was among the first publications from the military connecting global climate change to U.S. national security. In addition to creating conditions that favor terrorism, the report says climate change multiplies other threats.

“Unlike the challenges that we are used to dealing with, these will come upon us extremely slowly, but come they will, and they will be grinding and inexorable. But maybe more challenging is that they will affect every nation, and all simultaneously,” retired Navy Vice Adm. Richard Truly wrote in the report.

The grim assessment doesn’t have everyone convinced. Fears that water and food shortages could destabilize countries and mobilize terrorists are misguided, said University of Texas Assistant Professor of Public Affairs Joshua Busby.

“It’s helpful to maybe get the attention of high-level decision makers by making the claim that climate change is going to contribute to Islamic radicalism in sub-Saharan Africa, but I don’t believe it,” Busby said.

The Brookings Institution, a Washington D.C.-based think tank, commissioned Busby to write the report “The Climate Security Connection: What it Means for the Poor,” which says an increasing number of natural disasters could necessitate more use of military forces for security and humanitarian aid. Climate change should be considered in terms of opportunity cost, Busby said in a phone interview.

The U.S. military’s increased role after an extreme weather event reduces its ability to deploying units for other missions.

The military’s expanded humanitarian role was seen most recently following Cyclone Nargis in May, or after the 2004 Indian Ocean earthquake. While these were strict aid-delivering missions, Catarious noted harsh climate conditions have also resulted in the U.S. military deploying to regions for stability operations. Though not related to climate change, an acute example was Somalia during the 1990s where a drought destroyed farming, causing widespread starvation.

Somali rebels viewed the ongoing peacekeeping operation as a threat and attacked. The ensuing violence included the famous Black Hawk down incident, where a U.S. helicopter crashed in Mogadishu causing an intense battle between U.S. forces and local militants.

Researchers say a possible powder keg could be fermenting in Haiti. The Caribbean nation suffers from extensive environmental degradation that has exacerbated terrible health conditions and seriously weakened Haiti’s economy. Additionally Haiti is governed by a weak state and has become a transit stop for transnational criminal elements trafficking narcotics, according to the U.N., which recently renewed a peacekeeping mandate there through October 2009.

“If you see climate change negatively affecting things like agriculture productivity, that then affects the food supply and compromises food security,” said Andrew Price-Smith, a Colorado College professor of environment, health and political science. “The knock-on effects of compromised food security may include radicalization.”

Price-Smith argues that climate change alters weather, redistributing diseases to regions with debilitating effects on people. He has proposed studying the variability of El Niño on diseases in places like Bangladesh, Peru and in sub-Saharan Africa. Price-Smith suggests that El Nino, fluctuating surface water temperatures in the Pacific Ocean’s central tropic region, could act as a model for projecting climate change’s effects. While the Bush administration’s hands-off policies on climate change are widely criticized, the U.S. is a leader in countering infectious diseases and other public health concerns.  Price-Smith argues that climate change and the spread of such diseases are connected.

“It seems odd to me to be such a sideline actor in terms of the environment,” Price-Smith said. “These two things aren’t disconnected. Global climate change directly affects human health outcomes whether through disease distribution or agricultural productivity and food security.”

Fingar said in testimony about the assessment that the conditions exacerbated by the effects of climate change could force vulnerable populations to migrate to neighboring nations with potential destabilizing effects.

“Many likely receiving nations will have neither the resources nor interest to host these climate migrants,” he said. “Receiving nations probably will have increased concern about migrants who may be exposed to or are carrying infectious diseases that may put host nation populations at higher risk.”

The intelligence assessment also said some parts of the United States could be significantly affected by extreme weather events. The damage by climate change to complex infrastructure like naval facilities, ports, oil refineries and nuclear power facilities would come at a high cost, said retired Air Force Maj. Gen. Richard Engel, director of the Climate Change and State Stability Program at the Office of the Director of National Intelligence.

Gas, steel and minerals like magnesium for high-technology goods largely come from regions in Africa, the Middle East and former Soviet block countries in Central Asia, said Kent Butts, director of the National Security Issues branch in the Center for Strategic Leadership at the Army War College. All of these regions are likely to suffer adversely from an altered climate. Many already contain fragile governments.

Butts said countries strategically valuable to the United States could be destabilized because of an inability to deal with climate change-related issues like storms, floods or new precipitation patterns that spread new diseases. Migrants carrying infectious diseases that would put host nation populations at higher risk. A destabilized strategic ally would prompt U.S. intervention.

The military has also been keeping a close eye on south Asia. China, Pakistan and India are all nuclear states that depend on the conditions of the Tibetan highlands where glaciers store water for the region’s rainy season. Climate change has depressed monsoons and receded highland glaciers, resulting in what could become a serious competition for water. Couple those conditions to those countries’ nuclear arsenals and experts say there is plenty of reason to worry about regional stability.

Another region of possible conflict stems from warmed conditions in the Arctic Circle. Russian, Canada and the United States are all keenly aware of the potential abundance of resources like oil in the region. Already chilled relations between the West and Russia over the conflict in Georgia could escalate with competition in the Arctic.

Butts and his colleagues in the military and intelligence communities suggest the only real way to counter the security threats posed by climate change is for the United States government to stop denying and begin understanding climate change implications.

“Climate change is an important issue,” Butts said. “The rest of the world agrees that it is and if the U.S. became more involved it would be beneficial. It would help us in our relations with other countries and it would help us address existing threats to our national security interests.”